Published between 1968 and 1975, Adventures in Poetry was edited by poet Larry Fagin and printed and assembled at The Poetry Project at St. Mark’s Church in-the-Bowery.

C: A Journal of Poetry first appeared in May of 1963, edited by Ted Berrigan and published by Lorenz Gude. The format borrowed the production example of the recently published one-off magazine, The Censored Review, edited by Ron Padgett. It became an influential showcase for the work of New York School poets and artists — like Berrigan himself, along with Ron Padgett, Joe Brainard, Kenneth Koch, James Schuyler, John Ashbery, Dick Gallup, David Shapiro, and others.

An eclectic periodical, published coincident with Tom Clark’s Fulbright study and posting as Instructor in American Poetry at the University of Essex. The titles varied but each was denoted “A One Shot Magazine… No Copyright No Nothin.”

Edited by Beat poet LeRoi Jones and Hettie Cohen, Yugen was devoted to “A New Consciousness in the Arts and Letters”. Bringing together the Beats, Black Mountain poets, and the New York School poets of the late 1950s, Yugen took its name from the Japanese aesthetic term meaning “a profound mysterious sense of the beauty of universe … and the sad beauty of human suffering.”

“Big Table was launched in Spring 1959 following the suppression of the Winter 1958 issue of The Chicago Review. An exposé in the Chicago Daily News revealed editors Irving Rosenthal’s and Paul Carroll’s plans to publish work by William S. Burroughs, Allen Ginsberg, Lawrence Ferlinghetti, and other Beat writers, and the administration quashed the magazine…”

— from A Secret Location on the Lower East Side

Jack Spicer’s J ran for eight issues: Nos. 1–5 were edited by Spicer in North Beach where contributions were left in a box marked “J” in The Place, a bar on Grant Avenue in San Francisco; Nos. 6 and 7 (an Apparition of the late J) were edited by George Stanley in San Francisco and New York City respectively while no. 8 was edited by Harold Dull in Rome. Spicer believed that poetry was for poets and the magazine had a small circulation but cast a long shadow.

While working at the Lewis Meyer bookstore on 37th and Peoria in 1959, Ron Padgett had an idea. Taken with the work of the era’s literary giants and New York-based “little mags” like the Evergreen Review, Padgett, barely 17 and still a junior at Central High School, decided that he would start his own avant-garde lit journal. He and his best friend Dick Gallup would be co-editors…

Bill McArthur studied drawing and painting at Edinburgh College of Art, then took a degree in Fine Art at Edinburgh University. At Edinburgh he became known as an illustrator and cartoonist in the student press, and editor of the student magazines Gambit and Cleft.

In the Fall of 1961, Jon and Louise “Gypsy Lou” Webb published the first issue of their avant-garde poetry and prose magazine, The Outsider. Hand-set and letterpress printed, the journal straddled the line between traditional books and modern works of art, and the journal made an outsized impact on the literary world, shining a light on the talents of Beat Generation, Black Mountain and other avant-garde and counterculture poets, writers, and artists of the era…

DAS NETZ, No. 2, edited by Peter Maurer and Clays 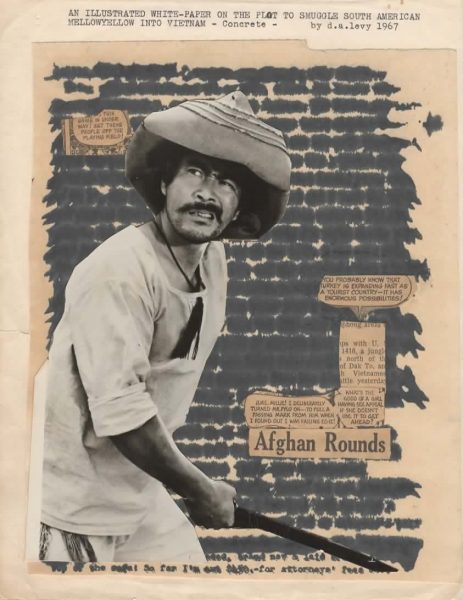