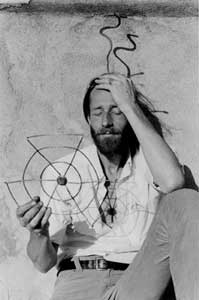 Angus MacLise was a musician, poet, artist, and counterculture figure who was a mainstay of the downtown New York arts scene in the 1960s.

Angus MacLise was born in Bridgeport Connecticut in 1938. He studied music and dance before moving to Paris in the late 1950s. In Paris he and his high school friend, avant-garde filmmaker Piero Heliczer, started the Dead Language Press in 1958. The press specialized in poetry and published early works by poets such as Gregory Corso, Olivia de Haulleville, Hendrik Jan Marsman, Anselm Hollo, and others. MacLise also published several of his own poems and manuscripts through the press, including the pamphlet Year that renames all of the days of the year—a convention that MacLise and many of his friends used in dating correspondence or artworks.

MacLise and Heliczer moved back to the United States in the early 1960s, settling in New York and bringing the press with them. In New York, MacLise continued his publishing efforts, while also pursuing music and becoming involved in avant-garde theatrics and performance art pieces. He was a member of the Theater of Eternal Music, started and organized by composer and musician LaMonte Young. He was a regular participant in Fluxus events in New York City and appeared in many experimental films being made by his friends in the downtown arts scene at the time, notably Piero Heliczer and Ira Cohen.

MacLise was a founding member of the Velvet Underground—he was introduced to the band through his roommate John Cale and became the band’s first drummer. Though he helped to found the band, and may have even given it its name, his time with the Velvet Underground was short due to MacLise’s disinterest in creating art for profit or on a schedule dictated by anything other than his own inspiration. He does not appear on any of the band’s recordings.

In 1967 MacLise moved briefly to Berkeley, where he joined the Floating Lotus Magic Opera Company, a street performance troupe that included the painter and illustrator Hetty McGee. McGee and MacLise were married in Golden Gate Park in a ceremony officiated by Timothy Leary. The two would later have a son, Ossian, who began living in a Tibetan monastery at the age of 4 and was recognized at 7 as a tulku—a reincarnation of a lama.

The couple moved back to New York where MacLise again collaborated with Ira Cohen, scoring and appearing in Cohen’s film The Invasion of the Thunderbolt Pagoda.

In 1970 Angus and Hetty began a tour of Asia that ended with their settling in Kathmandu, Nepal. In Nepal, MacLise helped operate the Spirit Catcher Bookshop in Kathmandu which became a gathering place for the growing community of artist and poet expatriates living and working in the area. He founded a literary and poetry journal, Ting Pa, and in 1974 he and Ira Cohen started the Bardo Matrix publishing venture. They published work by MacLise, Paul Bowles, Charles Henri Ford among others.

During this time he was particularly interested in calligraphic art and works on paper. Much of his own work from his time in Nepal includes calligraphic illustrations in a made-up script. He was working on establishing a handmade paper company, Himalayan Paper, Inc. at the time of his death.

WASTE PAPER, No. 4, edited by Tridib Mitra and Alo

Spicer, Jack. AFTER LORCA — from the copyright p